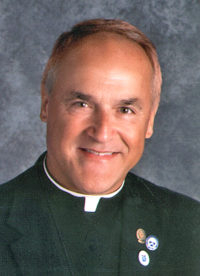 Raised in Warren, PA, Father Scott Jabo was ordained a Catholic priest for the Diocese of Erie in 1990. He received his M.Div. and S.T.B. degrees from St. Mary’s Seminary and University (Baltimore) and a M.Ed. from Duquesne University (Pittsburgh). After 29 years of involvement in high school ministry, including 20 years as head of school, Fr. Jabo began his assignment as Vice-Rector of St. Mark Seminary in 2020 and Vocations Director for the Diocese of Erie in 2021. In addition, he is co-chaplain to the Serra Club of Erie. He is on the Board of Trustees for Gannon University and the Board of Directors for the Erie Catholic School System. Fr. Jabo is a Fourth Degree Knight with the Knights of Columbus and serves as chaplain for the Retired Pennsylvania State Police, Troop E.